The horror found footage film As Above, So Below (2014) received quite a bit of attention two years ago while in theaters, and it’s oft been recommended to me since. I’m a fan of found footage, despite the usual infuriating nature of the genre, so I’d been interested in seeing this for a while. The premise of the film is intriguing, especially considering the set is actually the Catacombs, which also then means that many of the bones and skeletons are probably real. Pretty darn spooky, right? If dusty calcium scares you.

In the end, I can’t say that this is a good horror movie, but I was engaged. The beginning of the film is incredibly slow, however once it picks up it did keep my attention. The main character Scarlett is an academic wizard who thankfully is an expert in… symbology, which I suppose is the justification for how she’s able to interpret the hieroglyphics on the Catacomb walls to mean some pretty absurd things. She rattles off her interpretations in rapid-fire whispers that barely make sense, and the viewer must just accept that she is right because otherwise they’re fucked and the plot must go on, afterall. There is a moment where she attributes the phrase “Abandon hope all ye who enter here” to mythology, and as a massive literature nerd, I cringed pretty hard. I imagine most of what she says is similarly cringe-worthy. But it is a horror movie, so I accepted Scarlett’s rants and hoped for scary imagery.

The movie provided. The Catacombs look amazing, and while I didn’t find the jump scares effective and grew tired of them, the creatures are eerie-looking and the shadows and CGI worked well (meaning it was not particularly excessive). Many of the scenes are framed nicely and the overall aesthetics and appearance of everything works. I would say this is the strongest aspect of the whole movie—the visuals and setting. 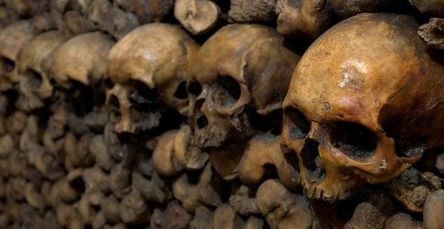 Eventually I began to believe the movie was self-aware and purposefully loading itself up with tropes for sheer amusement. This is not art. Some of the scenes are so ridiculous that they are laughable. A particular scene features Scarlett essentially getting a star in Mario and going back through the tunnels they just spent 45 minutes of film time traveling through, then Mario-starring it back again.

Also, the film doesn’t really try to make the camera situation make sense. Some may find this irritating.  Many found footage films attempt to explain where the footage is coming from, how they were able to get certain angles and shots, but that doesn’t really happen here in a convincing manner. I wasn’t really bothered much by this, as in the end the whole premise is ridiculous and I just wanted to see spooky things.

If you want your movies to make sense, then this isn’t really the film for you. There’s a long list of nonsensical, bad moments in this movie. But if you enjoy found footage irregardless and want to see a horror film shot in an interesting setting with some cool scenes, then this will surely entertain you—enough.

my name is bec and i like to heck

wow, this woman talks about a lot of random things

previously, on this blog

You may be required to show proof of id.

to move with love, to move in leaps.

food for the dead

Writing from a place of joy.